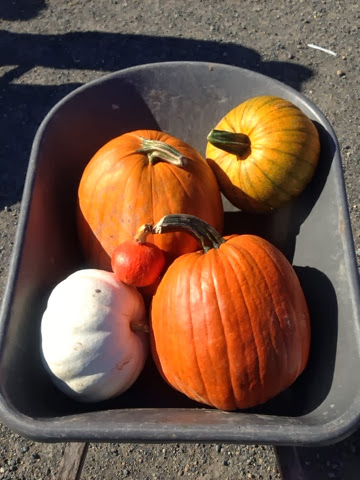 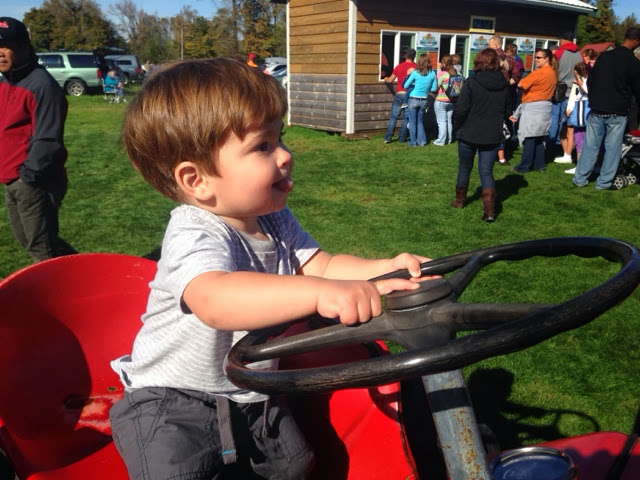 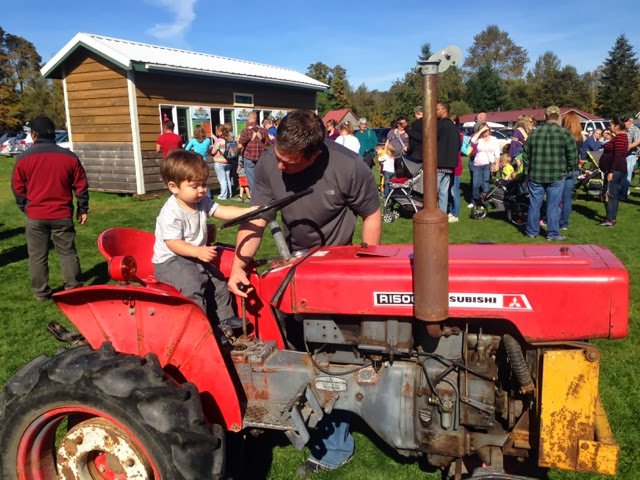 Gabe and I were very excited to take Sam to the pumpkin patch this past weekend. We have discovered that one of the best things about having kids is having an excuse to participate in activities that you’ve secretly always enjoyed but couldn’t do before because we were childless and it would have been weird . Pumpkin Patches fall into this category. So do petting zoos. Oh, and public pools. Kinda weird for two grown adults to want to hang out at any of these places. Throw a kid into the mix and Ta-Da! Instant acceptance.
So, anyways, we had a great time…and I think Sam did as well. The place was pretty crowded so we decided to skip the hay rides and corn mazes, etc. Sam was too young to really enjoy those activities anyway; he was more than content to sit on the tractor with Gabe and “push” the wheelbarrow full of pumpkins. He tried so hard to push the wheelbarrow just like Daddy. It was adorable.
We bought a white pumpkin this year. I have always wanted a white pumpkin. They are so creepy. I love them.
My camera died twenty minutes after we arrived (apparently that’s what happens when you don’t charge it for three weeks, go figure) so I had to make due with my iPhone, which turned out okay. We ended up leaving shortly after that because my morning sickness kicked in and I didn’t want to embarrass myself by vomiting all over the pumpkins in front of hundreds of small children.
My morning sickness is brutal this time around. With Sam, I probably had one bad week, and that was it. With this baby, I’m taking anti-naseua meds and eating bread around the clock. Ugh. Maybe that means it’s a girl. Or twins. Or triplets. Whatever he or she or they may be, I am so looking forward to the first trimester ending. Then the nausea subsides. And the stretchy pants come out. Yes. Wednesday Knit Along #1 (And Other Things) I finally finished Sam’s Abate sweater yesterday. We took it for a test run on my parent’s farm this morning. I knit the 4 year size because I wanted him to be able to wear it for more than one season and that seemed to work out perfectly. (I know the photos are a bit fuzzy, but you try convincing a 14 month old to hold still for more than .5 seconds. It’s impossible.) I used a yarn I’d never heard of before, Plymouth Yarn Coffee Beenz. It’s a wool blend so it’s not scratchy and is machine washable.

I’m quite proud of it. It’s adorable.

So is the kid.

My first batch of harvested lavender is drying in the dining area; it gives off the faintest scent of lavender when I walk past it. I look forward to harvesting more.

Gabe and I canned the pears given to us by family friends. I used the same book as before, Canning for a New Generation: Bold, Fresh Flavors for the Modern Pantry by Liana Krissoff. We made spiced pears in red wine and a pear and ginger preserve. What does one do with a preserve? I have no idea. It tastes amazing eaten straight out of the jar with a baby spoon accompanied by a glass of cheap red wine…so I’ve heard.

While discussing our future plans for the farm, Gabe and I decided that we would try our hand in raising bees. It doesn’t seem terribly complicated and Gabe puts honey on everything. Since I switched our family over to the Paleo diet, we’ve been going through lots of bottles of honey; most food items are sweetened with honey as opposed to refined sugar, a big no-no in Paleo. We thought it would not only save us some money, but also be a fun activity for us and our kid(s) when they become older. Gabe checked out a few books on bee keeping at the local library, one of them being shown in the above photo. I can’t comment on the content of the book just yet, as I’ve only skimmed through the first few chapters, however the pictures are lovely. I love the robin’s egg blue color of the hives. I will probably insist Gabe paint our hives the same color. Because one must have colorful bee hives.